What is a cochlear implant?

How does a cochlear implant work?

The implant works in the following way.

The internal component is placed by a surgical procedure and is in position at all times under the skin. After surgery, the external component is programmed for the patient. It is worn similar to a hearing aid with the person placing the external device in the morning and removing at night before going to bed. The external device is usually worn as an ear level processor that sits behind the ear, or for very young children, a body worn processor may be used. Newer speech processors sit entirely on the head, alleviating the need for anything on or in the ear.

Are there different types of cochlear implants? 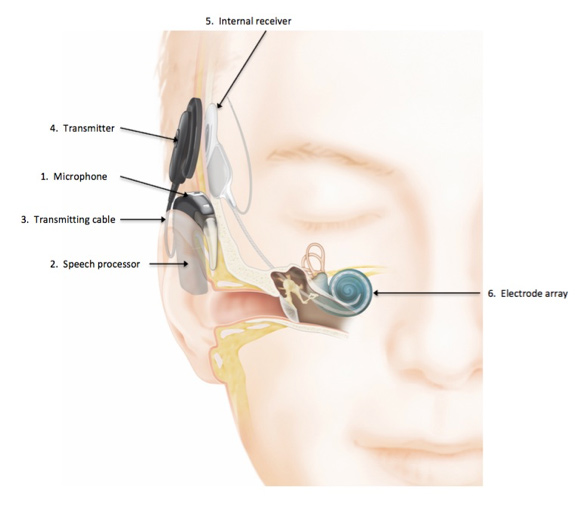 Yes! Some cochlear implants only provide electrical stimulation. Other devices, known as “hybrid” devices are intended for individuals who have better hearing in the low and mid frequency regions and poorer hearing in the higher frequencies. These devices make use of the user’s natural hearing by providing a low frequency acoustic signal while stimulating the high frequencies with an electrical signal. The result is a more natural sound and improved speech understanding.

There are three basic types of speech processors:

Med-El
Over the ear device

Who is a potential candidate for a cochlear implant?

How do I know if I am a cochlear implant candidate?

What happens at surgery?

What happens after surgery?

Do I need any other listening equipment?

Many individuals find that they can further improve their ability to understanding spoken language by using other types of technology in conjunction with their cochlear implants. Some examples may include:

What do I do if I am interested in learning more about a Cochlear Implant option for myself or a loved one?

Call 914 693 7636 and request a consultation for a Cochlear Implant. You will be scheduled for an appointment to meet with one of our neurotologists to discuss cochlear implant technology and take the next steps for testing if desired.